Home  /  test
You are not authorized to view the contents of this page. Please log in to view the submissions.
1962
15 Apr

The following work is devoted to an account of the characteristics of crowds.
The whole of the common characteristics with which heredity endows the
individuals of a race constitute the genius of the race. When, however, a
certain number of these individuals are gathered together in a crowd for
purposes of action, observation proves that, from the mere fact of their being
assembled, there result certain new psychological characteristics, which are
added to the racial characteristics and differ from them at times to a very
considerable degree.
Organised crowds have always played an important part in the life of peoples,
but this part has never been of such moment as at present. The substitution of
the unconscious action of crowds for the conscious activity of individuals is
one of the principal characteristics of the present age.
I have endeavoured to examine the difficult problem presented by crowds in
a purely scientific manner — that is, by making an effort to proceed with
method, and without being influenced by opinions, theories, and doctrines.
This, I believe, is the only mode of arriving at the discovery of some few
particles of truth, especially when dealing, as is the case here, with a question
that is the subject of impassioned controversy. A man of science bent on
verifying a phenomenon is not called upon to concern himself with the
interests his verifications may hurt. In a recent publication an eminent thinker,
M. Goblet d’Alviela, made the remark that, belonging to none of the
contemporary schools, I am occasionally found in opposition of sundry of the
conclusions of all of them. I hope this new work will merit a similar observation.
To belong to a school is necessarily to espouse its prejudices and
preconceived opinions.
Still I should explain to the reader why he will find me draw conclusions
from my investigations which it might be thought at first sight they do not
bear; why, for instance, after noting the extreme mental inferiority of crowds,
picked assemblies included, I yet affirm it would be dangerous to meddle with
their organisation, notwithstanding this inferiority.
The reason is, that the most attentive observation of the facts of history has
Gustave Le Bon, The Crowd, 5
invariably demonstrated to me that social organisms being every whit as
complicated as those of all beings, it is in no wise in our power to force them
to undergo on a sudden far-reaching transformations. Nature has recourse at
times to radical measures, but never after our fashion, which explains how it
is that nothing is more fatal to a people than the mania for great reforms,
however excellent these reforms may appear theoretically. They would only
be useful were it possible to change instantaneously the genius of nations. This
power, however, is only possessed by time. Men are ruled by ideas, sentiments,
and customs — matters which are of the essence of ourselves. Institutions and
laws are the outward manifestation of our character, the expression of its
needs. Being its outcome, institutions and laws cannot change this character.
The study of social phenomena cannot be separated from that of the peoples
among whom they have come into existence. From the philosophic point of
view these phenomena may have an absolute value; in practice they have only
a relative value.
It is necessary, in consequence, when studying a social phenomenon, to
consider it successively under two very different aspects. It will then be seen
that the teachings of pure reason are very often contrary to those of practical
reason. There are scarcely any data, even physical, to which this distinction is
not applicable. From the point of view of absolute truth a cube or a circle are
invariable geometrical figures, rigorously defined by certain formulas. From
the point of view of the impression they make on our eye these geometrical
figures may assume very varied shapes. By perspective the cube may be
transformed into a pyramid or a square, the circle into an ellipse or a straight
line. Moreover, the consideration of these fictitious shapes is far more
important than that of the real shapes, for it is they and they alone that we see
and that can be reproduced by photography or in pictures. In certain cases there
is more truth in the unreal than in the real. To present objects with their exact
geometrical forms would be to distort nature and render it unrecognisable. If
we imagine a world whose inhabitants could only copy or photograph objects,
but were unable to touch them, it would be very difficult for such persons to
attain to an exact idea of their form. Moreover, the knowledge of this form,
accessible only to a small number of learned men, would present but a very
minor interest.
The philosopher who studies social phenomena should bear in mind that side

In Christian iconography, Christ Pantocrator (Greek: Χριστὸς Παντοκράτωρ)[1] is a specific depiction of Christ. Pantocrator or Pantokrator, usually translated as "Almighty" or "all-powerful", is derived from one of many names of God in Judaism.

The Pantokrator, largely an Eastern Orthodox or Eastern Catholic theological conception, is less common under that name in Western (Roman) Catholicism and largely unknown to most Protestants. In the West the equivalent image in art is known as Christ in Majesty, which developed a rather different iconography. Christ Pantocrator has come to suggest Christ as a mild but stern, all-powerful judge of humanity.

The most common translation of Pantocrator is "Almighty" or "All-powerful". In this understanding, Pantokrator is a compound word formed from the Greek words πᾶς, pas (GEN παντός pantos), i.e. "all"[4] and κράτος, kratos, i.e. "strength", "might", "power".[5] This is often understood in terms of potential power; i.e., ability to do anything, omnipotence.

Another, more literal translation is "Ruler of All" or, less literally, "Sustainer of the World". In this understanding, Pantokrator is a compound word formed from the Greek for "all" and the verb meaning "To accomplish something" or "to sustain something" (κρατεῖν, kratein). This translation speaks more to God's actual power; i.e., God does everything (as opposed to God can do everything). 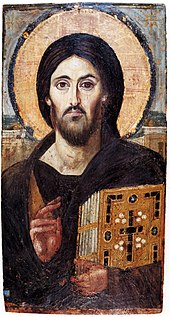 The oldest known icon of Christ Pantocrator, encaustic on panel (Saint Catherine's Monastery). The two different facial expressions on either side may emphasize Christ's two natures as fully God and fully human.[6][7] 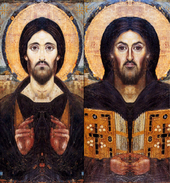 Mirror composites of the two sides of the face.

The icon of Christ Pantokrator is one of the most common religious images of Orthodox Christianity. Generally speaking, in Medieval eastern roman church art and architecture, an iconic mosaic or fresco of Christ Pantokrator occupies the space in the central dome of the church, in the half-dome of the apse, or on the nave vault. Some scholars (Latourette 1975: 572) consider the Pantocrator a Christian adaptation of images of Zeus, such as the great statue of Zeus enthroned at Olympia. The development of the earliest stages of the icon from Roman Imperial imagery is easier to trace.[8]

The image of Christ Pantocrator was one of the first images of Christ developed in the Early Christian Church and remains a central icon of the Eastern Orthodox Church. In the half-length image, Christ holds the New Testament in his left hand and makes the gesture of teaching or of blessing with his right. The typical Western Christ in Majesty is a full-length icon. In the early Middle Ages, it usually presented Christ in a mandorla or other geometric frame, surrounded by the Four Evangelists or their symbols.

The oldest known surviving example of the icon of Christ Pantocrator was painted in encaustic on panel in the sixth or seventh century, and survived the period of destruction of images during the Iconoclastic disputes that twice racked the Eastern church, 726 to 787 and 814 to 842. It was preserved in Saint Catherine's Monastery, in the remote desert of the Sinai.[9] The gessoed panel, finely painted using a wax medium on a wooden panel, had been coarsely overpainted around the face and hands at some time around the thirteenth century. When the overpainting was cleaned in 1962, the ancient ima